This months chosen is artist is the really creative and talented Steve Taylor, who has kindly agreed to share his favourite photographs. I started following Steve on Flickr as I was struck by his exciting use of bold colours, and humour which transforms the Ordinary into the Extraordinary, (This is also the title of one of Steve’s albums on Flickr ).

Steve’s images remind of the work by the colour-revolutionary photographer William Eggleston,  Andy Warhol and Martin Parr. His art starts off as pure photography, but he then uses post-processing to enhance the images so they can look more like paintings or prints. He does this to give his images more meaning…see Steve’s comments to read  more about this.

“Happy Days  : In the original photo you could still make out the features of the family group, so increased the contrast so that the joy of walking/running on the beach was emphasised rather than seeing the actual people.” – Steve Taylor

A few words from the Artist himself :

“I started off as most people did using black and white negative film which I could develop and print myself. I then moved on to colour transparency for the wonderful vivid colours. When I had kids the photography slowed down and it was all colour negative that you took to the chemist to print. Film was a lot harder than today. You had to visualise the result in your mind. One of the ways of doing this was to squint your eyes. The more you squinted the more contrast you could see. So the faster the film the more contrast. Also we used to press the aperture (depth of field preview) button to see what would be in focus. There was a lot of looking at the lens to see if the aperture was set to a particular aperture can I bring the focus closer and still have distant objects (clouds) still in focus. Also back in the film days the aim was to get a perfectly clear picture with little not in focus, blur or bokeh.”

Steve’s Art features a wide range of everyday subjects such as street art, quirky decorated buildings, objects, nature, landscapes etc. which tend to feature bold colours and contrast, ironic juxtapositions, and humour. It is these characteristics which I really love. He also   creatively and skilfully  uses digital manipulation to emphasise meaning, and also create some really interesting   abstract images.

All Alone illustrates his creative use of instead of increasing colour saturation he  reduces the  colour and details . This   emphasises  atmosphere, and the  juxtaposition of the sofa   which to me conjures up images of people socialising but the reality is,  the loneliness of the virtually empty house. 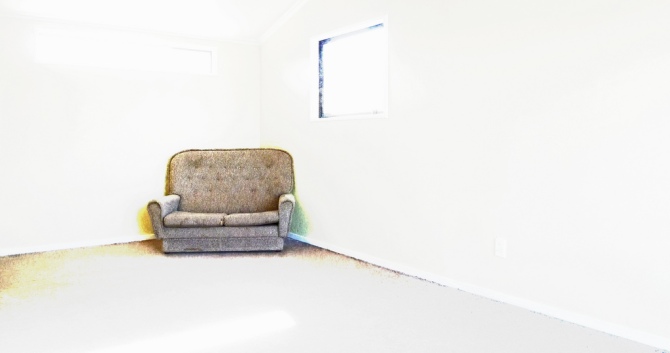 “All Alone  : When I was in real estate I was selling a house with a sleep out and the only thing in the room was this small couch. I put it in the corner and took this picture. In the processing I reduced any details and emphasised just the couch and carpet.”- Steve Taylor

“How white is your underwear: I took this picture with a bright winter sun coming through the door. I processed it to get the most contrast on the washing basket and to have the feel of the glow of the super white washing is causing the shadow of the basket. ” – Steve Taylor

I love the contrast which highlight the patterns of the washing basket and that the object is an everyday house item.Also it reminds me of the subjects featured in Andy Warhol’s images.

Leadership: The Art of Mending Fences: I loved the look of this broken fence, but on it’s own it looked a bit everyday. I ran the picture through DAP http://www.mediachance.com/dap/ and combined the DAP picture with the original. I would recommend trying out DAP and look forward to the version 5 coming in the near future. – Steve Taylor

Thanks to Steve for sharing his vivid, intriguing and thought provoking art. It has been an honour to showcase it and if you are curious to see more of his amazing photography   see:  https://www.flickr.com/photos/stevetaylors/

One thought on ““The Ordinary Meets Extradordinary””